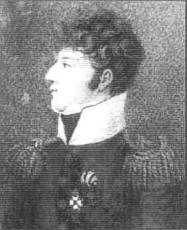 He was borne in Płonne, as a son of Juliusz, castellan of Chełmno, and Ludwika of Pawłowscy's family. His military career had begun in Prussian army. After two years of service in the rank of ensign he asked for being dismissed and moved to the polish army as lieutenant in regiment of polish ulnas. After several years he left the army and came back to his family state so to devote himself to agriculture. He came back to the army at the times of Tadeusz Kościuszko's insurrection. He was promoted to cavalry-captain and then major in corps of general Jan Henryk Dąbrowski. After the defeat of the insurrection he came back again to agriculture, but he kept contact with Legions of J.H.Dąbrowski formed in Italy, which he supported with his money. To the military service he came back again in November 1806. He was given the order to form the regiment of chivalry, which take name of "comrades" from the big number of deserters from Prussian regiment of the same name. In January 1807 he become its leader and colonel. In campaign of 1807 he was leading partisan war in Pomeranian region and gain the fame of good officer. His military skills were proofed in the conquering of stronghold Gdańsk. Soon he reorganized his troop and formed 6th regiment of ulnas. As a gratitude to his service in campaign 1807 he received The Honorable Legia and Cavalier Cross of polish military order. At the war of 1809 he took part in either in conquering Lublin and Zamość, and defense of the Sandomierz. As a gratitude to his deeds he was promoted to the rank of general of brigade and soon after that was given the command of Department of Lublin. In February 1812 he was moved to equal post in Radom Department. On the april 1812 he was designed for leadership of 28th Brigade of light horse chivalry of the Grand Army. In champagne of 1812 he lead this brigade in IV-th reserve corps of chivalry. He took part at the battle of Mir and than was fighting in Byelorussia under the command of General J.H.Dąbrowski. During the retreat of the Grand Army he was wounded in the battle at Borysów and in several days were captured by Russians. He was sent to Charkov and stayed there till the end of 1814. When he returned to the motherland he was dismissed and given the permission of wearing military uniform. He settled down and devoted himself to land-owning and agricultural profession. He passed away in Płonne. Dziewanowski left very interesting literature heritage. He translated into polish language several positions and among them: the work of capt. Grand-Maison "Little war - description of the service of light regiments at the war", and then the work of French writer Chantreau, that was by the translation fit to the polish reader and was published in 1812 under the title "Extract from the elementary military history with various remarks and national additions of the translator". He was also author of interesting diaries. He left also the manuscript of the work of polish chivalry. Janusz Staszewski left such a Dziewanowski's description: "He was one of the brilliant and well oriented officers of his époque. Courageous in the field, brave and rapid in orientation, which brought him both the fame of "Zagonczyk" and upbringing skills. He was trying to teach and spread out his experience to the younger officers. [...]. He represented high sense of civil courage. In case of the fault he did not use excuses or circumstances, he did not tried to build atmosphere of excuse, he pleaded guilty."