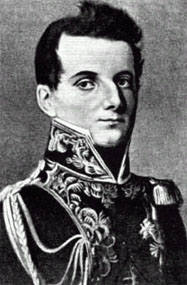 He started his military service in 1802 in prussian army in 12 Regiment of Dragoons of Breisewitz. In 1806 he joined Poznań Honorable Guard, that welcomed Napoleon. In December 1806 as lieutenant and chef of riflemen company of 1sr Regiment of Infantry (later on 9th Regiment of Infantry). He fought at Teczew and during the siege of Gdańsk was wounded and captured. After the treaty of peace in Tylża returned from the captivity and graduated up to the rank of captain and adjutant of general Jan Henryk Dąbrowski. Then he was directed to the staff of the Grand Army and started studies in Paris Polytechnics. As a consequence of this fact he took part in the Spanish campaign 1808. During the war of 1809 wounded at Aspern. In 1811 moved to the regiment of lanciers of French imperial Guard in rank of the chef of squadron. In russian campaign of 1812 fought at Smoleńsk and Berezyna.
In campaign of 1813 he distinguished himself at Reichenbach, where he was wounded. On the 19 June of 1813 he asked for being dismissed after the information of the will of Napoleon of giving back Duchy of Warsaw to Russia. After return in 1815 he devoted himself to agricultural economy. In 1827 elected to the prussian parliament and in 1830 became vice-marshal of it. During the November Uprise of 1830 he defended Warsaw in battle at Olszynka Grochowska and then took part in the expedition to Lithuania. Promoted to the rank of general of brigade and then to rank of general of division. With this dignity he became the chief-in-command of Lithuanian part of Army and forced to cross the prussian border. For the participation in the upraise kept in prison for two years in Szczecin. Then he devoted again to the agricultural economy gaining the fame of the excellent landlord, pioneer of the modern solutions in agriculture and polish industry in Great Poland region. Elected several times to the Great-Poland parliament and prussian parliament. Author of diaries. Died in his family nest Turwia on 27th of March 1879.