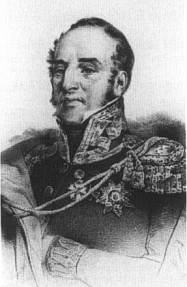 He started the service in the Army of Polish Kingdom in 1790. In 1792 he was promoted to the degree of captain of chivalry. Took part in the wars with Russia in 1792 and in 1794. He was fulfilling the service of adjutant of general Jasiński. After the fall of the Kościuszko uprise he emigrated to France. Between 1801 and 1804 he was learning in Parisian schools in the field of artillery and engineering. In 1806 he was commander of national guard, that was greeting the Napoleon in capital. Then he was promoted as adjutant-officer of the Emperor.
In 1807 he received the promotion to the rank of colonel and commander of the 4th regiment of cheval riflemen. Then he was awarded by the cavalier cross of Honorable Legia. In 18108 he was commanding 2 regiment of ulnas. With his regiment he took part in campaign 1809. Before the strike of the russianwar he was promoted to the rank of general of brigade and was given the command of brigade of chivalry in Vth corps of Great Army. He was awarded by Napoleon for the battle at Smoleńsk and officers cross of Honorable Legia. At Medynia he was captured by Russians. During the November Uprise of 1830 he was the president of the uprise gouvernment in Lithuania.After the fall of the uprise he emigrated to Saxon and then to France. Died in Paris and buried in the Pere Lachaise cementary. In 1939 his body was brought from France to Poland and buried on Powązki Cementary.