There is no need to convince anybody that Napoleon was widely appreciated in Poland. Nevertheless material proofs of this cult have not remained so many in our country. Erecting and then lasting the monuments of Emperor it was not accepted by the politics of three occupants od Poland, that were on opposite disposition to napoleonic tradition. Then there was disaster of II-nd world war and over than 40-years period of communistic oppression called PRL (People Republic of Poland).

We can treat as first monuments four triumphant arches erected by the citizens of Poznań on the way of expected arrival of Emperor in 1806. It was erected by the use of not permanent materials so its life was not so long. It was known that one of the arches was decorated by the "To Salvator of Poland", young noblemen with sable in the hand and fenix - symbol of the dissuading Poland.
On the times of Duchy of Warsaw there was two times organized initiative of erecting the monument of Napoleon. First time it was on 1808, when there was started by the general Józef Zajączek the public collect of money among the officers and soldiers ot commanded by him II-nd Calisian (Kalisz) Legion of Army of Duchy of Warsaw. Monument was planned to be erected in Kalisz but the initiative spread quickly into the whole Army of Duchy of Warsaw so the localization was moved to the capital of Duchy. There was organized national committeeunder, whose chairman was asked to be gen. Jan Henryk Dąbrowski - chief of Italian Legions. Project was to be performed by the famous architect Piotr Aigner (also known as architect of "Temple of Sybilla" and other numerous buildings). Firstly there was idea of triumphal arch, but Piotr Aigner`s proposal was to put the monument inspired on the cheval monument of Emperor Trajan in Rome (as it was also later on with cheval monument of Prince Józef Poniatowski sculpted by Thorvaldsen) at the beginning of Miodowa Street in Warsaw (that was named Napoleon`s street at that times).
Collection of founds was from the beginning realized well and even there were started excavation for the foundations. Next the works were stopped because of the some doubts, that were spread out among the military chiefs by "Jacobins" with Józef Niemojewski in the top. Their statement was, that "For the great Napoleon there is no necessary any monument, because his fame would last for ages". Nevertheless there were left the money, that had been collected before. Several years ofter the erection of the monuments had been stopped there nearly blown out the scandal, while it turned out that Dąbrowski, who kept collected money he could not settle accounts. Finally by the last will of general after his death the person that realized his testimony they got back 40.000 zlotys to Prince Antoni Sułkowski. That man accordingly to the will of the donators pay in the money on the building of monument of Prince Józef Poniatowski.
Next probation of the erecting in Warsaw the monument of Napoleon it was started in 1812. It was to be placed not on the open air, but in the interiors of Royal Castle - in Senators Hall. There was asked the most famous sculptor in Europe - Antonio Canova to perform two cariatydas for this monument, which designer was again Piotr Aigner. the master rejected to take the order and as a consequence of this fact there was given the order to his rival - Danish sculptor Bertel Thorvaldsen. The development of the events that happened in memorable year 1812 it made impossible to realize the project. In fact Thorvaldsen performed the sculptures but it weren't sent to Warsaw and finally burned with the Christiansborg castle. 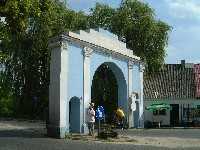 The only one napoleonic monument from the times of the Duchy of Warsaw is triumphant arch in Ślesin nearby to Konin. Precizely there is no clearness about the motives of its erecting and if it was build in memory either of Napoleon or of his brother Hieronim, or Warsaw Prince Frederic August, but the most important fact is that the monument remained. Contemporary form of it is not fully original. In 70ties of XXth century drunken driver of the crane tried to go with his carriage not respecting the height. As an effect the inhabitants of Ślesin had to reconstruct part of it. 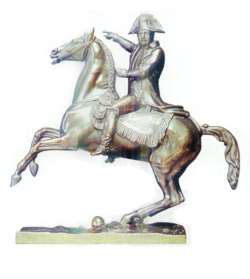 There was even close so to one of polish monuments of Napoleon was built in XIXth century ... abroad of the Poland. One of the most famous polish painters of XIXth century - Piotr Michałowski was also the sculptor (unfortunately up to our times there remained only several examples of his sculptures). Between 1832 and 1835 Michałowski, who was staying at that time in Paris, performed the project of the cheval monument of napoleon, that had been planned to be built in the Cour Carre of Louvre. Despithe the fact that the work of the polish sculptor gained the appreciation of marshal Soult and general Fabvier there did not realized the project. The work was in fact given to the fashionable at that time Italian sculptor Carlo Marochetti. He did not managed to realize the idea because of the fact of low founds and unwillingness of the french artists to give the work to the foreigners). The only one things that remained after the Michałowski`s project were bronze statuettes performed on the gypsum project. One of it is presented in collection of National Museum in Cracow. If it had happened building of the cheval monument of the Emperor of French it might be the only one such a monument in Paris. 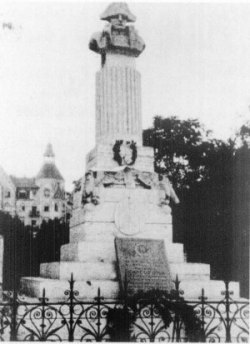 Real possibility of the memorazing great Emperor by the monument was after restoring independence of Poland in 1918. Ferfect opportunity of that was the hundred anniversary of the death of Napoleon, that was celebrated in Poland nearly as it was in France. One of the main points of the festivity was in our capital exhibition of so called napoleonic relics, that was brought by count du Moriez with the sentence that "France would have never entrust relics to any other nation than Polish". It were several things as follows: the hat, that was worn by Emperor on the Elba island and during campaigns 1814 and 1815, sword, that was used by him at Marengo, after death mask of Napoleon and bulled of Waterloo. This treasures were firstly exposed in school of lower officers, that was accompanied with honorable guards. In climax point of the fest it was brought in to Saski Place and then to National Museum, where it was visited by thousands of Poles.
Similarly important moment of the fest held on the 5th of may 1921 was opening of the temporary monument of the Emperor, that was built on the Warecki Place in Warsaw. Monument was formed as a column, that was finished on the top by the bust of Napoleon. On the base of the column guarded by the imperial eagles there was placed the granite table with the inscription proclaiming the change of Warecki Place into Napoleon`s Place. The author of not so good monument was Warsaw sculptor Jan Antoni Biernacki, that was more appreciated for sculptures either of the animal or in art-deco style. After several months the work disappeared from the Napoleon`s Place. Further traces of it has not been known.
On the day of the fest nobody pay attention of the artistic values of the monument. At the Napoleons bust with high attention there were addressed: President of Warsaw Piotr Drzewiecki, very well known admirator of the napoleonic époque Artur Oppman (Or-Ot) and Ignacy Baliński on behalf of the citizens of Vilnius, where were held similar fests. Comte du Moriez, who was delegate of the napoleonic committee in Paris, reported "There marsched brave armies with heads put up, with the hope in hearts, showing the honor to Napoleon and to Commander-in-chef [...] and youth of the high schools took and carried on the hands french generals". Charmed by this guests were noticing later on that "Poland devoted itself to France as Prince Poniatowski had done before". It is worth telling that the fests took place in various towns at that time, what was widely noticed in newspapers. 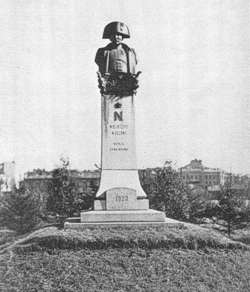 Next monument of Napoleon stayed in Warsaw as if by the some occasion. In 1923 on the Treaty of Ryga there got back to the capital of Poland from the vagrancy the monument of Prince Poniatowski by the Thorvaldsen. The fest of the opening on the 3rd may of 1923 was honored by the presence of the marshal Ferdinand Foch, that was visiting Poland at that time. French Commander-in-chef, that was also honored by the giving in to him marshal`s baton, was opening monument of Napoleon. Bust of the Emperor supported by four starting eagles, was placed on the basis, which was decorated by the inscription "To the great commander Military High School" and date 1923. Monument, that had been performed by Michał Kamieński, was placed at the corner of Koszykowa and Sucha streets in a front of the Military High School. At this monument most of the officers of the times between first of second world wars was making photos there. Nowadays there is no need to look for the bust of the Napoleon. It was destroyed in unknown circumstances, perhaps during the end of the war and precisely at the end of it, while the color metals were reaching high prices. By now the place of monument is at the court of housing at Koszykowa 79a. 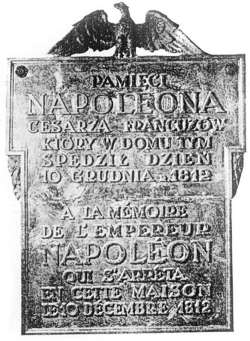 In the second half of twenties of XX century, when the relationships between the France and Poland were much colder major Kamieński proposed to the authorities of Warsaw building monument of the Emperor on his design on the place of Napoleon. He was refused politely explaining this fact by the necessity of the proclaiming the competition. This idea stuck and then no one returned to this idea.
Last manifest of the cult of Emperor of French at the time of IInd Polish Republic was not the next monument but memorizing table. It was opened on the English Hotel in Warsaw at the anniversary fest of French Nation - 14th july 1937. The fest was glorified by the participation of Marshal Edward Rydz-Śmigły, general Tadeusz Kasprzycki and french ambassador Leon Noel. Beautiful table with napoleonic eagle proclaimed: "TO MEMORY OF THE NAPOLEON, EMPEROR OF FRENCH, THAT SPENT AT THIS HOME THE DAY OF 10TH DECEMBER 1812". Below there was the same text in french language. Indeed this hotel was famous because of the fact, that the Emperor had been staying there retreating incognito from Moscow. Maybe here were said the words: "From the sublimity to ridiculousness there is only one step" (Du sublime au ridicule il n'y a qu'un pas). Hotel and tablet at the same time was destroyed during the Warsaw Upraise 1944. Several years ago there was build huge office building. Maybe it could be worth trying to help the table get back to its place? May be it could be worth to think about returning to the capital some monument of Emperor. It could be heard that the citizens of Warsaw are telling that beside the monument of Piłsudski there is still lack of good monument of Kościuszko and .... Napoleon.
During last several years there was by the set initiative of foundation "Kamieniec-Finckelstein - Napoleon in the Poland and Central Europe" idea of building the monument of Napoleon. Monument as a sign of both the significance and place is planned to be build among the ruins of Kamieniec Suski. We wish the success in realizing this idea.