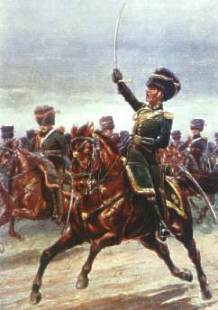 Horse artillery wore dark green uniforms and bermycas(caps) of dark fur. Individual weapon was slightly curved sables and pistols. Horse artillery of Duchy of Warsaw was formed in 1808. First company was donated and formed by Włodzimierz Potocki. Second one was formed by Roman Sołtyk, absolvent of Parisian Politechnics. horse artillery was for the first tome in the fire of battle at the Raszyn 1809 and become the weapon of high military values. In 1810 there was formed the regiment of horse artillery as a part of corps of artillery and engineers, that was composed by 4 companies (24 canons). Company of artillery had usually 6 canons - 2 mortars in this number.
JGLOBAL_LT JPREV JNEXT JGLOBAL_GT