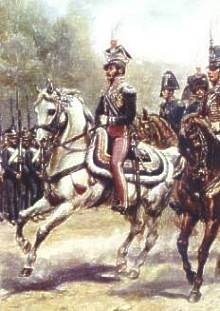 Officers of Army of Duchy of Warsaw took special place in polish nation. Veterans of the fights over the independence and former participants of the fight of the liberating motherland were surrounded by the public sympathy and became the symbol both of the public career and public activities for contemporary youth. Officers - especially of the lower ranks - they were conscious about this popularity that mad him start defined style of behavior. Good polish officer was expected to proof bravery in the field of battle, stand against of sallies and excess, duels and carousals, what was the form of underlining the importance of soldier than civil. This behavior that was expected in some regiments of chivalry, artillery or staffs, where served rich noble rustically youth, who could support themselves even 5 of chasseurs or 10 hussars.
Different to that was the life of usual officer of infantry or regiments of chivalry, that were stationed not in Warsaw but beside it. Contemporary polish Army was suffering very rarely by the lack of founds. It was the reason for example of not paying the salaries for the officers for months. Most of the officers had to either reduce their expenses or even use only this what was provided them by the government of local town. Officers corps of Duchy of Warsaw was formed mostly from the youth either of regular noble families or of the best families from towns. sometimes there happened also the sons of peasants. For many of them receiving the patent of officer was the social promotion and private success. In every several months superiors were preparing the so called conduit-lists, that consisted valuation of each officer to the service - his discipline, responsibility and knowledge. This valuation had serious influence on former promotions. It was one of the reason why most of them tried to deserve good opinion.
Many of the officers were perfecting his knowledge either by the Application School or by the reading books or journals. In Army of Duchy of Warsaw there served many persons of the scientific and cultural life as for example: Aleksander Fredro (play-writer and poet), Antoni Malczewski, Kazimierz Brodziński, Antoni Górecki, Tomasz Kantorbery Tymowski or Cyprian Godebski. Many young officers, members of the duels and joyful games become the best generals in next independence upraise of 1830.